Which Type of Milk Should I Buy?

Have you been confused about which types of milk to buy? It wasn’t that long ago that the only types of milk available were cow’s milk and soymilk. Nowadays, there are at least 6-8 different types of milk to choose from. Which one is best? What are the pros and cons of each? These are the questions we’re answering today.

Some of the types of milk out there now include soy, regular, almond, coconut, flax, hemp, pea, oat, and macadamia nut milk. Who knew? When choosing one over another, there are a few factors you’ll want to pay attention to. These include nutritional values, price, any allergies or intolerances, and shelf stability. Below we’ll explain the main different types of milk and their pros and cons. 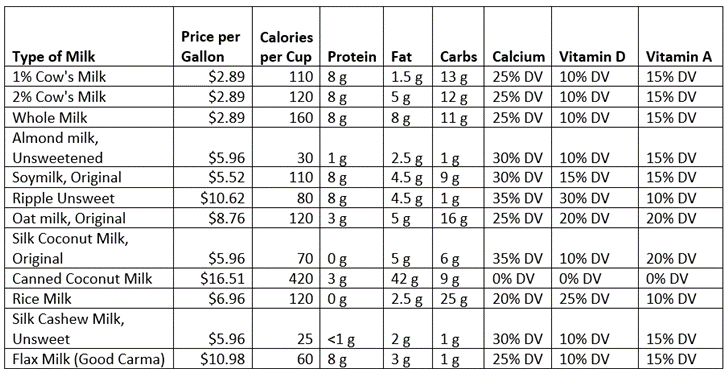 Benefits: Milk is a nutritionally rich food including protein, fat, carbs, vitamin D, vitamin A, and calcium. It is best to choose low-fat options because whole milk has a lot of saturated fat.

Downsides: There really aren’t many. Some may choose to not buy cow’s milk because they want fewer calories, carbs, or they cannot digest the lactose.

There are many types of almond milk nowadays. You can buy unsweetened or “unsweet” almond milk or “original” almond milk, which includes added sugar for flavor. There are even chocolate and vanilla varieties.

Benefits: Almond milk can be a great way to reduce calories for weight loss while still enjoying a milk-like drink/ingredient. It is high in calcium and vitamin D. Other than that, almond milk is nutritionally empty.

Downsides: Almond milk often has sugar added, so make sure you pay attention to that on the label. There can also be many other additives to almond milk such as carrageenan, locust bean gum, and gellan gum. If you are sensitive to any of these additives, then almond milk may not be for you.

There are also many varieties of soymilk, but the most basic include unsweetened and original. Soymilk is nutritionally very similar to regular cow’s milk. Soymilk is made with soybeans. The soybeans are soaked in water then blended then strained. The remaining liquid is the “milk.”

Benefits: Soymilk is high in protein, calcium, vitamin D, and vitamin A. It also tends to be lower in carbs than cow’s milk.

Downsides: The main downside is that soy is a common allergen, so if you’re allergic, avoid it! Some people don’t love the taste of it, but others find it to be a great milk replacement.

Ripple milk alternative is made using pea protein. It is also very similar nutritionally to regular cow’s milk. It is a fantastic alternative for children and adults who cannot tolerate regular milk, soymilk, or nut milk.

Benefits: It is void of all common allergens. It has added vitamin D and vitamin B12, which nutrients are extra important if following a plant-based diet. It is low in carbs and lower in calories than traditional milk. It also has a great amount of potassium like regular milk.

Downsides: It is expensive! Check out the chart above to see what I mean. It also contains sunflower lecithin, guar gum, and gellan gum for those sensitive.

Benefits: It tastes delicious if sweetened! It is fortified with some calcium and vitamin D, but not as much as some other types of milk.

Downsides: Oatmilk is expensive, it is low in protein, high in carbs, and moderately high in fat. It also tends to be high in sugar and calories in general. For those who need to be gluten-free, oat milk is not often gluten-free. Many oats are contaminated with gluten. If you must follow a gluten-free diet, please read the labels and make sure it is certified gluten-free.

Benefits: Refrigerated coconut milk in a carton is similar in nutritional value to almond milk. It has been fortified with vitamin D and calcium. It’s great for those who cannot have the other types of milk.

Rice milk is essentially water, rice, some type of oil, and fortified vitamins and minerals. It is high in calories and carbs.

Benefits: It can serve as an ingredient replacement for people that are allergic to every other type of milk listed here.

Downsides: It is high in calories and carbs while lacking protein and fat. It’s basically a sugary drink. As dietitians, we don’t recommend it unless you can’t tolerate any of the other types of milk.

Cashew milk can be low in calories (since it is thinned out with lots of water).

Benefits: Many say it is delicious.

Downsides: It is expensive! Plus, it tends to be low in nutritional value besides the fortified vitamin D and calcium.

Flax milk is one of the newer types of milk on the market! This is one that we are excited about because it has fiber and omega-3 fatty acids! It would be a great alternative for anyone allergic to nuts, soy, gluten, and dairy.

Benefits: It has just as much protein as regular milk plus it has 3 grams of fiber, and 1200 mg of omega 3 fatty acids per cup! On top of those benefits, it is extremely low in carbs.

Downsides: It is pricey! It can sometimes have added sugar.

Which Types of Milk Are Best?

The type of milk that you should buy depends on your nutritional needs, budget, and any allergies. If you tolerate regular milk, then the best option is regular milk! If you have the budget for something a little pricier and want the most nutrition from your milk, flax milk would be the way to go. However, we cannot really state one as the “best” milk to buy. If we were to advise against any types of milk, they would include rice and oat milk simply because these types of milk are high in sugar and low in other nutrients.

The nutrition facts listed in the chart above were pulled from the most common brands of each of those types of milk. They may not be 100% accurate for all milk. Please read your nutrition labels before purchasing.

How Your Thoughts Influence Your Weight

END_OF_DOCUMENT_TOKEN_TO_BE_REPLACED

Nutritionist VS Dietitian – What’s the Difference

Have you wondered what the difference is between a nutritionist vs dietitian? We're here to explain! If you can...

END_OF_DOCUMENT_TOKEN_TO_BE_REPLACED

Should I Take an Omega 3 Supplement?

END_OF_DOCUMENT_TOKEN_TO_BE_REPLACED